When I was younger, my mom used to get me to eat certain foods by telling me they were crunchy. That's how I started liking water chestnuts. We were in California visiting relatives, and it was summertime and there were ants invading the kitchen, and I had spent the week playing with a distant cousin who pronounced magenta as "magneta," and I didn't want to eat the water chestnuts. But my mom was right -- they were crunchy, and apparently, I liked crunchy. I still do. It's my firm belief that such foods as tuna/potato/egg salads, stuffing, and others that I can't think of right now, just aren't the same without those little bits of crunchy celery.

This story doesn't have much to do with anything right now, except that I thought of it while chopping celery tonight to throw in the slow cooker tomorrow, along with carrots, onions, garlic and chicken thighs. Also, I read this post from Jess about celery today, and realized that I never really knew what the difference was between celery hearts and celery ribs, but now I do. (Celery hearts are those smaller, tender pieces that you get to once all the bigger outer stalks are pulled away.) All signs point to this post being about celery today, but it's not. It's about eggs, which are better than celery but not crunchy at all, and kale, which, in this particular recipe, is crispy.

I'm sorry for rambling. I've been wanting to write a post for a while now, but nothing was coming to me. I have recipes to share, and photos to share, but no words to put on the page. So I figured I'd just sit down and write. And maybe post some photos that also have nothing to do with water chestnuts, or celery, or kale and eggs. 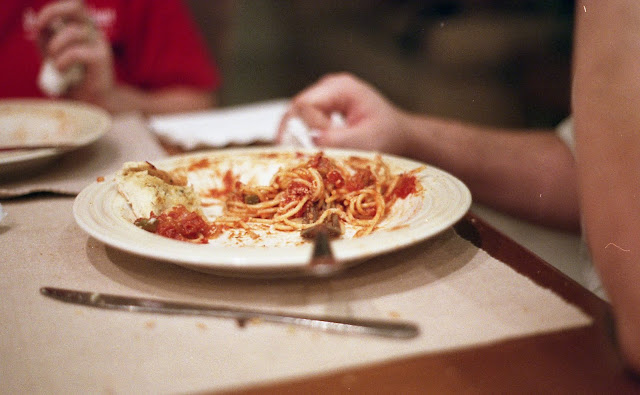 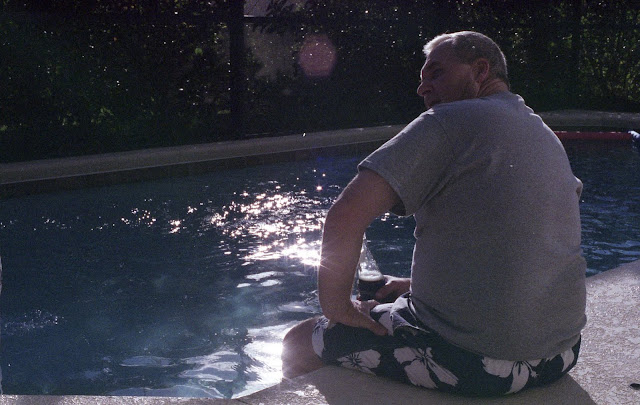 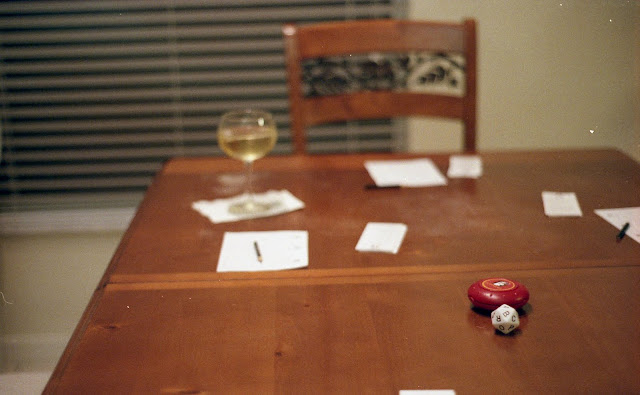 These were taken in Orlando, on a family vacation we took just a few days after Christmas. I made spaghetti on New Year's Eve, and we played Scattergories and Euchre and Ticket to Ride, and the pool was a little cold but not cold enough to stay out. I scanned the film myself, with the scanner I got for Christmas that I'm still not sure how to use, hence the dust. I have learned the following about scanning: It takes a lot of time. But taking pictures with film is expensive, and I'll save money any way I can to keep on shooting it. Here's another scanned photo, taken on Christmas morning. Having family halfway across the country is rough on the holidays, and the rest of the year for that matter, but video chats help. Let's talk about those eggs now. I made them for breakfast last weekend and the weekend before, although technically, it was more like lunch time. I'm not very good at mornings on the weekend, no matter how hard I try. There was a bunch of kale in the fridge, so I tore up the leaves and threw them in a frying pan with a touch of olive oil, let them wilt a bit, and pushed them aside to create a hole in the center. Then, I dropped in the eggs, covered the pan, and let the whole thing cook away for about three minutes. (I learned this "nesting" method from that same Jess, who sent me a book about eggs as a wedding gift, and makes a hell of a cute human, too.)

The eggs fried up nice and firm, with soft, runny egg yolks, as they should be. The kale crisped up nicely, so they were tinged with brown and had the texture of kale chips, except they were better than kale chips because there was no oven involved, and because of the runny egg yolk, of course.

Nowadays, if you want to get me to eat something, just drop a fried egg on it. Although crunchy still works, too.

Heat olive oil in a skillet over medium-high heat. Add kale and toss until coated with oil and just slightly wilted. Push the kale to the outside of the pan, and drop the eggs in the center. Cover the pan and let the eggs set, about three minutes. Do not touch. When the eggs are cooked to your liking, slide the whole thing onto a plate, salt and pepper to taste, and enjoy.
Email Post
Labels: breakfast eggs film holidays travel