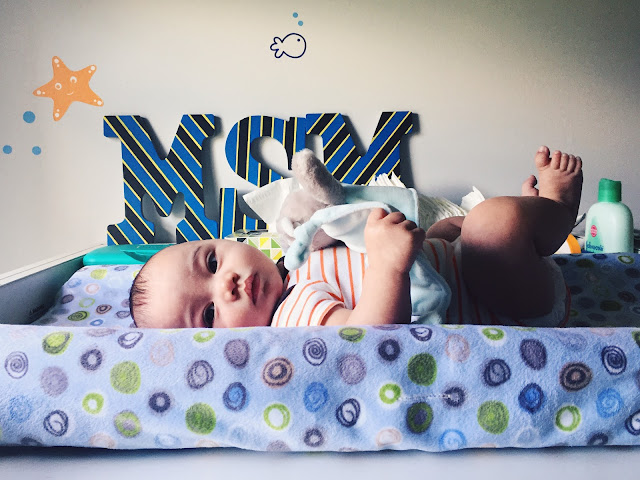 Little Murdo turned 4 months last week, and I can't get enough of the kid. At his 4 month check up, he weighed in at 15 lbs 5 oz and is 25 inches long. I've reached that point where I'm realizing just how quickly he's growing, and I want time to stop.

Here's an update on how he's doing these days.

How is Murdo sleeping? What's his schedule like?
In the last month he's graduated from swaddle to sleep sack, learned how to roll onto his tummy, and figured out how to suck his thumb. All of these things have helped him learn to soothe himself to sleep, so naps and bedtime are pretty easy -- once he's down in the crib, we rarely have to go back in to comfort him. We typically start putting him to bed around 7:30 to 8:00. His bedtime routine is pretty short and sweet -- change diaper, bedtime story, nurse, then a song while I bounce him on the exercise ball. He's starting to skip his middle-of-the-night feeding and sleeps straight through until I wake him around 6:15 to eat before I leave for work. Then he usually sleeps until 10 to start his day with Dad. During the day, he's awake for an hour and a half to two hours between naps, and naps anywhere from 40 minutes to two hours. Keep it up, kid!

How is Murdo eating?
He gets about six to eight feedings, and eats every three hours or so during the day. Mostly breast milk, but he'll get the occasional bottle of formula also. His pediatrician just gave us the go ahead to start him on solids. My goal has always been to breastfeed for at least six months, and I'm already pretty certain I'll continue after that. It's the best thing for him, of course, but also: Convenient! Easy! FREE! And now that I'm back at work, I really love the time we have together when I nurse him. 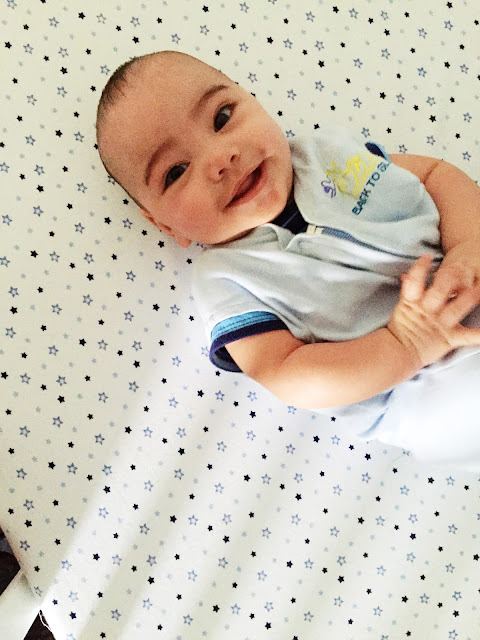 What's he into?
Lately he's been working on his grasping skills, and he just recently found his feet. He's gonna get that foot in his mouth any day now! He's laughing now, although getting more than a smirk or giggle out of him can be hard work. Put a camera or phone in front of his face and he freezes up and stares, so capturing one of his gummy smiles is nearly impossible. He is already mesmerized by screens. I can't believe I only have a 4-month-old and already have to make sure to limit his screen time!

And, because I get this question a lot, too...

How is it being back at work?
During the last couple weeks of my maternity leave, I wasn't really worried that I'd miss M too much or that it would be hard to leave him every day. I was more worried that he wouldn't eat or sleep well while I was gone. Well, once I got back to work I realized that there was no need to worry at all -- he'd be fine, and stressing out about it all day would not help at all. In fact, being away from him helped me realize that I can't control everything, which can be tough to grasp when you're in the trenches with baby all day, every day. So it's nice to be out of the house and doing non-Mommy things, but I do miss him more than I thought I would. I miss him every single minute. And though I don't think I could be a stay-at-home mom full time, I really wish there were a way I could spend more time with him.
Email Post
Labels: baby