A million moments, and caramelized onions. 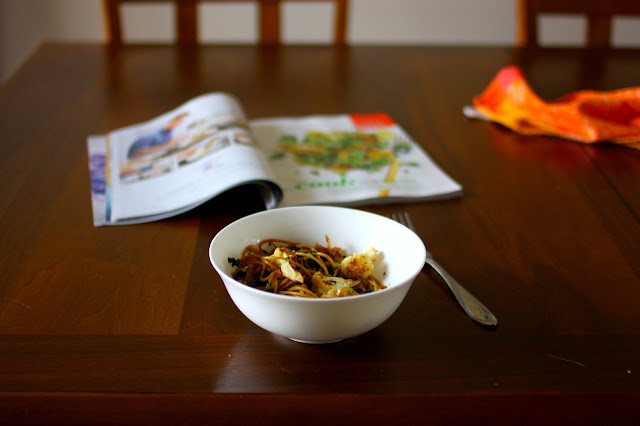 I sat in my car, in the left turn lane, waiting for the arrow to turn green. A car honked next to me on my right. I looked over to see this man, his window rolled down and his hands clasped together in a sort of beg/prayer, and I could tell by his gesture and his expression that he was asking me to let him go in front of me.
But I had just let the guy already in front of me cut me off, and I had been waiting in this lane for the past three or four light changes because traffic was really horrible for no reason this morning, and here comes this guy, who decides to speed past everyone else waiting so he can give me a pathetic look and ask to cut in line, and there isn't even enough room for him to get in front of me so really he'd have to go behind me,  and while I'm thinking of all this stuff the arrow changes green and I roll my eyes and before I know it, I'm moving forward and pointing for him to move it on back.
I felt really bad about it. I thought of all the times I felt so grateful for nice people on the road. I imagined him following me to work and getting out of the car to tell me I'm a despicable human being. I put myself in his place and saw myself as a heartless bitch. I let these things define me for the rest of the drive to work.
Silly, I know. But sometimes all it takes is something very small and suddenly, a judgment is formed and held firmly, if only for a moment. When filling out paperwork for a credit check at the furniture store a few weeks ago, I casually asked if my social security number was required, and the salesman gave me an impatient look and replied knowingly, "I can't check your credit without it." Just a few words and roll of the eyes, and I had become a dumb little girl playing house, and he became an asshole.
That guy probably isn't an asshole (even though his handshake was weak and clammy, and he spends his days convincing people to spend money on more stuff that they probably don't need). I'm not a dumb bitch who never lets people go in front of her in traffic (and I always give the "thank you" wave when people let me in!). We are more complex than what single moments and actions make us out to be in that instant. We are a million different moments -- some that we wish we could forget or do over, others that make us feel as though we're doing everything right. I try to remind myself this every time I let words tumble out of my mouth that I immediately regret. The ones that just hang there, that I wish I could grab and hide and pretend they never existed. But they're out there, and they were heard, and there's nothing left to do but apologize and move on, and hope that others don't let those single moments define me, either.
It kind of reminds me of all the onions I've been caramelizing lately. About five times in the past two weeks, I've thrown a sliced onion in a pan with olive oil and let the whole thing cook down until brown and sticky, sweet and thick. It's so easy -- I often read a book next to the stove while the onion cooks, stirring every few minutes, joking to myself that I'm not really cooking but rather, you know, just hanging out with an onion.
And when it's done, I am amazed every time. Here is this onion, this simple food that you think you know just by looking at it, but give it a little time and attention and in just half an hour, it can change into something completely different. It becomes a sauce for pasta. An addition to a warm salad. It makes a soup seem almost sinful, and turns a ho-hum sandwich into something you'd order at a restaurant. It makes food deeper and richer and tastier.
It's so much more than just that single moment when you hold the raw onion in your hand and think you know exactly what it is or ever could be.
We're all more than that. 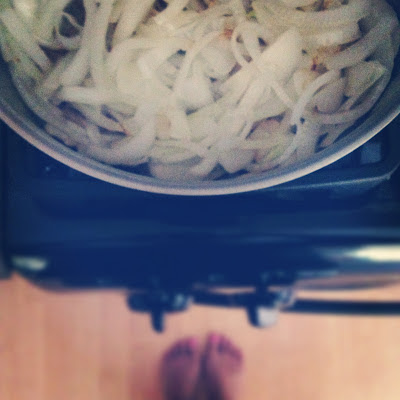 How to Caramelize an Onion
Grab a large onion. Peel and slice it however you want. Heat a tablespoon or two of olive oil in a (NON-non-stick) skillet over medium heat. Throw in the sliced onion and let it cook a few minutes, until fragrant and translucent. Give it a stir. Continue cooking the onion for another 20 to 30 minutes, stirring occasionally so the onion starts getting a good brown color without burning/sticking to the pan. When the bottom of the pan starts to get brown, add a tablespoon or so of water. As the water sizzles, scrape up the brown bits with the a wooden spoon. Keep adding more water and scraping as the pan gets more brown -- all those brown bits will cling to the onion and make it that thick sticky sweet that is so good. The onion is done after about half an hour, when it looks and smells and tastes nothing like the onion that you just peeled and sliced.

What to Do with Caramelized Onions