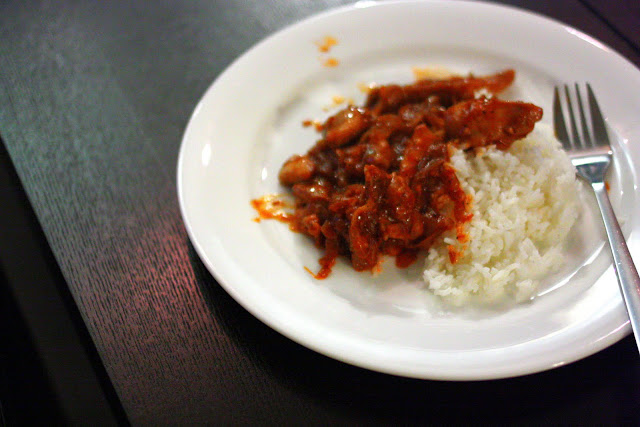 OK. It's about time we talk about Sriracha. I've mentioned it in passing here before, suggesting you add it to some kale and eggs, or sneaking a blurry image of it into a photo of fried rice. But we've never had a real discussion about it. The kind where I come out and tell you that I might have a problem.

I've never had a high tolerance for spicy foods, or any tolerance for that matter. Mild has always been my heat level of choice. Are those two little hot peppers next to that menu item? No, thank you. That recipe calls for jalapenos? I'll just skip that step. Spicy foods were just too painful to my taste buds to fully enjoy. Most of them still are. Hot peppers that sting my mouth at the first bite are just too much. But then in came Tabasco, with its vinegary kick and slow, tangy burn. I like the slow burn. I could put just a drop of Tabasco on a pork rind and feel the slightest tingle of flavor without stinging my tongue. A drop turned into two; two turned into a healthy shake. 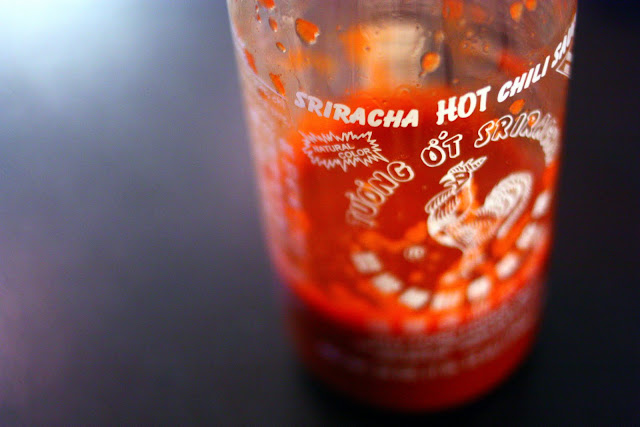 I should also tell you that Murdo is obsessed with hot sauce. There are some foods that I think he just uses as a vessel for hot sauce and nothing more. I've never seen him not eat something because it was too hot. When he discovered Sriracha sometime last year, I put a small squirt on a bite of chicken, just to try it. Too much. I don't know what it was that made me keep eating it -- sheer determination to strengthen my taste buds, I suppose -- but eventually, I was putting Sriracha on everything. Lately, a favorite snack has been Lay's potato chips with Sriracha. Crackers work, too. I can't eat a banh mi without it, and I can't believe I went so long before adding it to ramen. A couple of months ago, when I decided Sriracha is great on meatloaf, I knew there was no turning back. 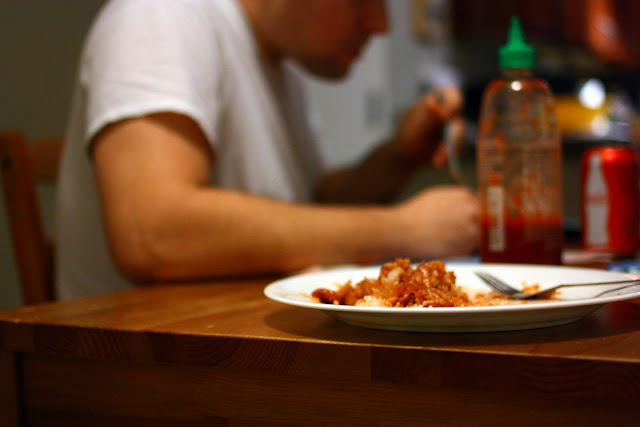 And now, there is this Sriracha chicken. The first time I made it, I followed the recipe exactly, and can you believe it? It wasn't spicy enough for me. I've since tweaked it so that Murdo says it's almost too hot, which is to say, it's just right. To give you a good idea of its heat level, think of a four out of five hot peppers on a Chinese restaurant menu. Adding actual hot peppers to the dish would probably give it a full five. The hoisin sauce and ketchup add a tangy sweetness to the sauce, and the ginger is absolutely key.

I haven't quite expanded past hot sauces, but I feel like I just woke up a whole new set of taste buds and shoved them into a room full of foods I could never eat before. We're ready. 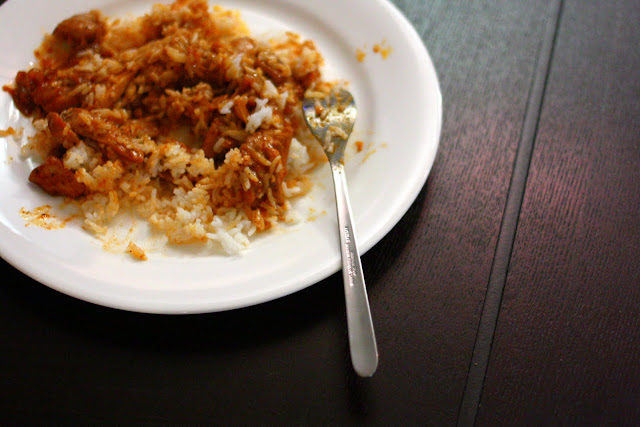 Sriracha Chicken (adapted from Cooking Light)
The original recipe calls for boneless, skinless chicken breasts, but I've found that thighs are much more tender and flavorful. This makes enough sauce for a little bit more than 1 pound of chicken.

Make the sauce by combining hoisin, ketchup and Sriracha in a small bowl. Adjust to taste. Set aside.

Heat oil in a large nonstick skillet over medium-high heat. Add onion, ginger and garlic, and cook until just tender and fragrant, about 3 to 4 minutes or so. Add chicken to the pan and let brown on one side, about 5 to 7 minutes. Turn chicken over and cook until done. Stir in sauce and toss to coat, letting the mixture thicken for a few minutes more.