Film Friday: Fried eggs and edamame (and why I shoot film). 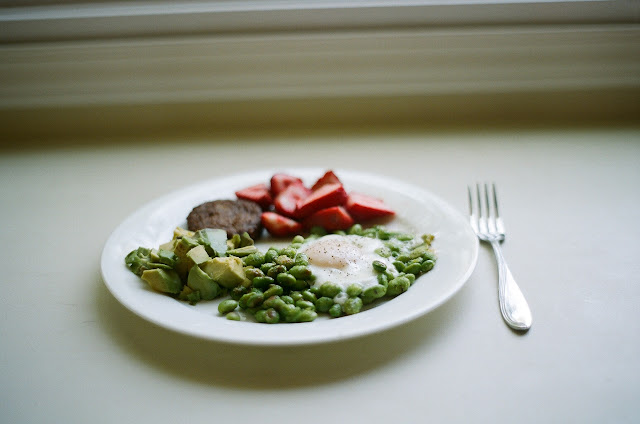 On the day we moved into our house, my sister-in-law approached me after returning from the most recent unload from the apartment and said timidly, "There's been a casualty."

I didn't know if she was being serious or joking. I thought of the cats. I wondered where Murdo was. I slowly drew in my breath as she lifted up my camera -- the Minolta that Murdo's dad had given to me, that he bought in the early 80s for a few hundred dollars and chose because it was simple and fully manual, that he used to take photos of Murdo when he was growing up, that was built like a tank and unveiled my love for film. It had fallen out of a box on the way from the apartment to the truck. I pulled the camera to my eye and breathed as the needle moved up and down with the light, the shutter successfully closed and opened, the film wound back. The shutter speed display at the bottom of the viewfinder was slightly askew, and the filter was dented, but otherwise it still worked. Tank, indeed. 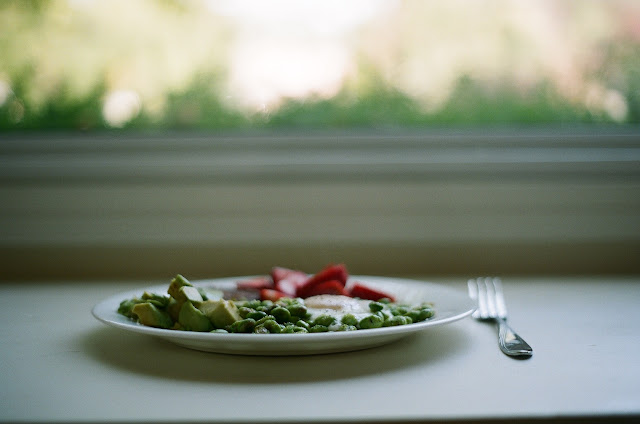 I haven't been taking many film photos lately. Moving two towns over means that I'm now two towns further from my local camera shop where I get my film processed. Scanning the film myself takes time, patience, swearing at single strands of cat fur that make their way onto the scanner. The photos here are from the only two rolls I've taken all summer.

Yet still. There is something about holding an old, sturdy camera in my hands. The satisfying, heavy click of the shutter as it releases. Watching for when the light hits at a certain time of day, filtering through the leaves of a tree or reflecting on a table, the kind of light that adds a layer of texture, depth, surprise, magic to film. Getting a roll developed and seeing where that magic turns up. The results are not just captured moments, but moments that turn into something else entirely.

A plate of breakfast becomes a quiet morning, soft and comforting. 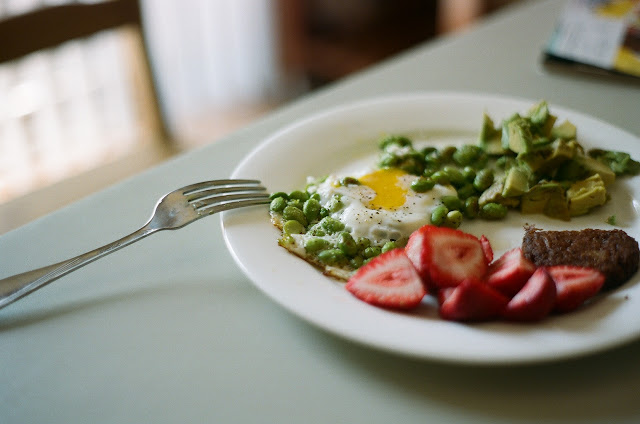 Fried Eggs and Edamame
Now here's a power breakfast, with a cooking method not unlike fried eggs and crispy kale. Toss half a cup or so of edamame into a skillet that's been heating with olive oil over medium heat. Let cook for a few minutes. Then crack an egg (or two) over the pile and cover, and cook a few minutes more, until the egg white is set and browned on the edges, but the yolk is nice and runny. Or longer, if you like. When it's done, sprinkle with salt and pepper, slide onto a plate, snap some shots with your film camera, and enjoy your morning.
Email Post