I always feel really cool when I make pancit, probably because not many people other than Filipino moms know how to cook pancit. It's like having a secret key to someplace really special, and no one else can get in without you. And everyone wants in. Friends, I'm giving you the key.

Filipino cooking isn't an exact science, and the recipe below certainly isn't an exact formula. Add vegetables and seasonings according to your own tastes. Pancit has a very mild flavor, so be sure not to go crazy with the soy sauce. Pork can be substituted for the chicken, or added with the chicken if you're into that sort of thing. Make it vegetarian by eliminating the meat and oyster sauce and using vegetable broth instead of chicken broth. Add tofu if you want. Be prepared to become very popular after sharing pancit with others. People will try it at a party and spend the rest of the night saying, "Who made this? It's awesome." And then they'll track you down and corner you and invite to their house next weekend. They weren't planning on throwing a party next weekend, but they will if you come. Just be sure to bring some pancit. 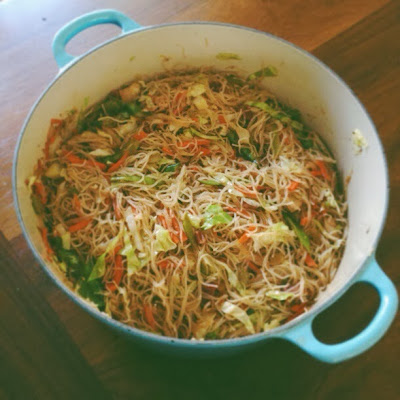 Pancit Bihon
This feeds a lot of people. I suggest throwing a party and serving this dish. Or bring it to a potluck. Everyone will love you.

You can find Bihon rice noodles at any Filipino grocery store and most Asian grocery stores. If you can't find them, you can substitute angel hair pasta, broken in half and cooked in the chicken broth/water/soy sauce mixture, below. I often use angel hair if I'm making pancit as a quick weeknight meal for me and Murdo, when I want to skip the step of soaking the noodles and reduce the quantity significantly.

Chinese sausage is a very fatty pork sausage that adds a salty bite to the dish. It can be found at most Asian grocery stores, usually in the frozen meat section.

I've also made this dish vegetarian by using veggie broth instead of chicken broth, soy sauce instead of oyster sauce, omitting all the meat, and adding firm tofu (marinated in soy sauce, sauteed beforehand in garlic, and added along with the rest of the veggies).

In a large pot or wok, brown garlic and Chinese sausage in oil. Add the onion and chicken. When the chicken juices start to run, add the shrimp and cook until almost done. Add oyster sauce and black pepper and stir to coat. Stir in pea pods, carrots, and celery, and cook until slightly softened, about 5 minutes. Stir in cabbage and cook another 2-3 minutes, until cabbage is slightly wilted. Season with a generous squeeze of lemon.

Meanwhile, soak the rice noodles in water for about 5 minutes, or until soft. In a large pot, boil chicken broth, water and soy sauce. Add the rice noodles and lower the heat. Stir to keep the noodles from sticking. When soft, spoon the noodles into the veggie mixture, reserving any extra broth. Toss the noodles, veggies and meats together, adding more broth as needed.